If there’s one particle that’s always stumped me, it’s が. The way I’ve always used it is by memorizing set phrases like:

There are just certain times you always use が right?

You’ll only get so far with that way of thinking. Principles over memorization!

It wasn’t until I read A Students’ Guide to Japanese Grammar, by Naomi Hanaoko McGloin, that it really clicked for me. It’s one of those books that sat on my shelf for a few years, and blew me away when I finally built up the courage to read it. If you’re established in the basics of Japanese grammar and want to dive into some of the deeper nuances then I highly recommend it. 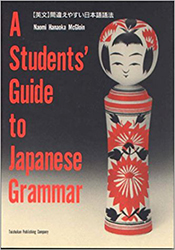 Topics covered in this lesson:

Note: For this lesson I'll be using modified Hebonshiki romaniji.

The main function of は is to mark the topic of a sentence. That’s topic, not subject. The difference is super subtle, but McGloin defines a “topic [as] a word or a group of words which indicates what the sentence is about.”

A topic that takes は should be either:

These are the general uses of は, although there are many more like emphasis and/or contrast.

The particle が has a few uses, but they’re all related to the subject. Here’s a quick list before going into more detail:

A subject that takes が should either:

Like in the case of は, though there are more uses of が, but this is a good start.

This is where it gets interesting.

The difference between が and は is subtle. They’re both related to the topic/subject, but differ with regard to emphasis.

Many thanks to Naomi Hanaoko McGloin for her book and those who proofread this post.

[1] “Wa and Ga,” A Student’s Guide to Japanese Grammar